Recently, one juvenile Pelagic Cormorant was found on Granville street bridge where a Good Samaritan rescued him just before he was hit by a car. Unfortunately, incidents like these are a common occurrence – many birds nest on the bridge trestles (under the bridge on the structure/framework), making them more at-risk to car accidents, human disturbances and predatorial challenges. Male Pelagic Cormorants choose to build small and shallow nests on rocky cliffs or on man-made structures such as bridges and shipwrecks, using debris from the ocean (such as rope and plastic). Grass, sticks, and seaweed are also used to make the nest and it is lined with their excrement to keep its form and make sure it sticks to the cliff. 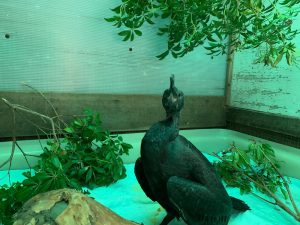 Pelagic Cormorants have black wings that can look green or purple in good light and their small slim bodies help them forage for food in stone-ridden water.  They can also hold their breath for as long as two minutes while they deep dive for fish. To find food, these clever birds do a combination of foraging and deep diving, examining rocky waters for small fish swimming between stones diving (as far as 138 feet) to catch fish (such as codfish and Pacific herring), often eating small invertebrates on their way up.

Since Pelagic Cormorants are vulnerable to imprinting and habituate easily, Wildlife Rescue uses several creative strategies to minimize this while they are in our care. While interacting with the Cormorant, staff and trained volunteers use imprinting gear that covers the shape of our bodies so they are no longer humanoid, do not talk around them (only using bird songs and ocean sound in the background so they don’t habituate), and using decoys (dummy birds) for them to connect with. Of course, mirrors are used to reflect their own appearance – giving them the illusion of being near others of their own kind. 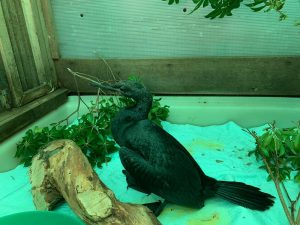 Of course, Cormorants also need to learn how to survive on their own. While this particular cormorant was just learning how to fly, that is not always the case – often fledglings are brought in and have to learn how to perch and fly with the assistance of Wildlife Rescue (while still avoiding habituation and imprinting). To encourage natural behaviour (such as preening), Wildlife Rescue uses innovative cages and large diving pools where they can dive for fish and learn how to hunt. While they are often still young at this point, they are still dangerous. With their hooked bills, long necks, and quick reflexes (for fishing), Wildlife Rescue staff have to be cautious – so only staff and volunteers who have had special training and proper personal protective equipment can treat them.

After being taken into Wildlife Rescue, this young Pelagic Cormorant was treated for dehydration, weak muscles and low body weight (for his size). The Pelagic Cormorant also suffered from a laceration on his upper mandible and a possible hairline fracture on his pelvis. Blood tests also revealed potential emaciation. After being treated with anti-fungal medication to prevent aspergillosis (commonly used to treat diving birds), the Pelagic Cormorant was put in an enclosure with a mirror and dummy bird (so it would feel less lone) and then was tube-fed until he was ready to self-feed. Unfortunately, while he was responding well to treatment and care, the injuries were far too severe for the vulnerable bird to adhere to and deceased overnight.

The goal for all Wildlife Rescue staff and volunteers is to provide the best treatment and individual care to all birds so they can return to their natural habitat as strong and healthy adults. Unfortunately, natural and human disturbances cause severe injuries and sometimes even death for vulnerable wildlife.

Help save your local wildlife today!