How to Protect Ground Nesting Wildlife

Who is this beautiful shorebird?

With large heads and eyes, and thin legs with wide wings, Killdeer can be spotted on the West Coast year-round. Like many other birds, Killdeer have brown wings and white bottoms. They also have a bright orange rump which makes them highly conspicuous in flight. To confuse predators and keep them from harming eggs during nesting season, Killdeer make multiple nests and then chooses the best one to use. These nests are scrapes (simple holes dug in the ground that is deep enough to hold the eggs, so they will not roll away), and items such as rocks, sticks, and trash are typically added after egg-laying starts. In one experiment, it was proved that Killdeer tend to choose light-colored objects (such as light-colored sticks) rather than dark ones – though the reason for this is still unknown. Killdeers tend to make their nests in spots with little to no vegetation such as golf courses, parks, lawns, and sandbars. 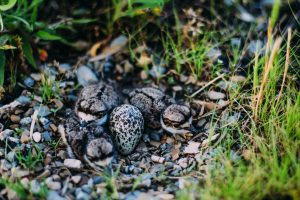 Recently, two baby Killdeer were rescued after someone found them abandoned with no parents nearby. Wildlife Rescue staff suspect the parents may potentially be struck by a vehicle or other urban challenges, an all-too-common occurrence this time of year.

Killdeer nest on the ground or flat roofs until the eggs hatch 24 days later. The parents look after their young until they are ready to take flight after approximately 25 days. These two babies will be raised at the Wildlife Rescue’s hospital until they are young adults and are capable of surviving on their own.

Killdeers tend to hop and run on flat ground, foraging for invertebrates such as snails, crayfish, and earthworms. However, these birds will also eat leftover seeds from farmers. Of course, Killdeer are quite shy and will hop (and then fly) away from humans, but when predators approach their nests, killdeer will distract them by bobbing and calling loudly. Another method they use to keep predators away is faking an injured wing – a technique that Killdeer are excellent at.

Since Killdeer tend to nest in open areas, they are especially at risk of threats such as traffic accidents and poisoning from pesticides. Sports fields such as golf courses, soccer fields, and baseball fields are all locations where Killdeer might nest and face challenges. Sometimes challenges in urban environments are inevitable and together we can protect this beautiful bird.

How to help these birds survive? 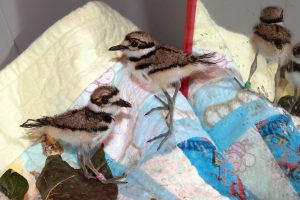 Being cautious and doing a quick check before using and mowing sports fields is one way to make sure that these birds are not harmed during the nesting season. As well, being careful while driving and keeping a watchful eye on the road can help Killdeer when they nest since these birds will often use parking lots as nesting spots. The use of pesticides can poison Killdeer since it often harms the food they eat. Using natural pesticides instead of chemicals on open areas such as lawns will help Killdeer survive.

Of course, aiding injured birds is a way to help as well. If you see a bird that has exposed bone or blood, bugs or insects covering it, no feathers, or a bird that is sleeping, human intervention is required. Call Wildlife Rescue’s Support Centre at 604-526-7275. To help us return your call quickly, please leave your contact information and observation.

When adult Killdeer are killed, their young will struggle to survive. Doing our part and supporting Killdeer will make sure these families can survive during the nesting season.