Winter is Flush with Thrushes

As our seasons change, so do our feathered neighbours. This time of year, we see fewer Rufous Hummingbirds and American Goldfinches, but several other birds stick around. One type of bird is the thrushes, a family of songbirds.

Thrushes are similar species that belong to a songbird family called Turididae. They are found all over the world, but the most diverse populations are in the Old World and Africa. Turidae range in size and they often have thin bills and short, smooth legs in common. The family includes birds such as the Eastern, Western, and Mountain Bluebirds, the Townsend’s Solitaire, Veery, and American Robin. 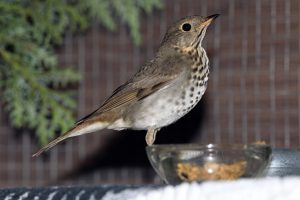 Thrushes in the Lower Mainland

Two types of thrushes you may spot in the Lower Mainland are the Varied Thrush and the Hermit Thrush.

The Varied Thrush may at first be mistaken for a Robin, but its more complex patterns of orange and slate set it apart. Males are slightly brighter than females and immature males. This shy bird can be territorial and aggressive at bird feeders, but they will play nice and flock with other species when searching for invertebrates and berries.

Varied Thrushes are considered a year-round species in the Pacific Northwest, but some inland populations migrate south. They love the rainy old-growth forests of our region but are found in a wider range of habitats like parks, lakes, and fruit-bearing areas in the winter. This may be why they’re more easily spotted this time of year.

The Varied Thrush has a haunting call that consists of a single, vibrating and nasally tone drawn over a few seconds. It will repeat the note several times over different pitches, with a few seconds of rest in between. 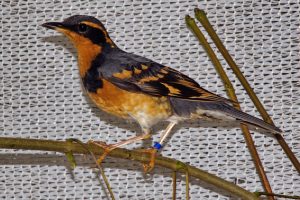 The Hermit Thrush is another year-round resident of the Pacific Northwest. It also has a distinct and pleasant—if somewhat lamenting—song, consisting of a few thrilled notes at various pitches. While it’s a small, unassuming bird with a similar plumage pattern to other birds, you can distinguish Hermit Thrushes by their spotty breast and brick-reddish tail.

According to migration maps, Hermit Thrushes stay year-round in the Pacific Northwest. The ones that migrate are the last of the five North American thrushes to migrate south for the winter and the first to return north for the spring.

Robins are less visible in the winter, but the Pacific Northwest is actually a year-round home for them. While a Robin scrounging for earthworms in backyards and lawns is a common springtime sight, these birds tend to huddle in trees for much of winter, and wander according to seasonally available food, which may be why they’re less visible this time of year.

The Robin diet changes throughout the day and year. They eat more earthworms in the morning (the early bird catches the worm!) and eat more fruit later in the day. They also prefer more fruit in autumn and winter.

The delightful American Robin song is often remembered with the phrase “cheerily, cheer up, cheer up” and is sung faster in the morning.

As you may imagine, this species is of very low conservation concern. In fact, breeding pairs can produce three broods a year. No wonder they’re so numerous!

Thrushes, including the Varied Thrush and the Hermit Thrush, are birds we see often at Wildlife Rescue. They face growing challenges and obstacles navigating in their natural habitat due to human and natural disturbances.

Window strikes are a common cause of injury to many birds. They can’t see the glass, so they try to fly through windows and injure themselves or even die as a result.

Window strikes are especially dangerous this time of year because many birds migrate at night and are attracted to light.

To prevent window strikes, consider putting up window decals on your windows, mark windows with tempera paint, or use ABC BirdTape, one-way transparent coverings, and screens. You can also keep your blinds closed or partially open, and turn off indoor lighting at night.

Migrating birds are often exhausted. Sometimes, they can even be grounded unable to take off. This makes them vulnerable to predators.

Predator attacks are common reasons why birds show up at Wildlife Rescue. While we have little control over our native predators like hawks and coyotes, many birds get attacked by domestic cats.

It’s safer for both wildlife and cats to keep them inside, as traffic and larger predators can threaten house cats too. For strictly outdoor cats, attaching a bell to their collar or other devices will not eliminate their chances to catch wildlife however it can reduce the occurrence of capturing native wildlife.

A problem for many birds during the winter is food scarcity. Humans can help by planting native plants that offer food year round in their gardens or planters, some people even choose to put up bird feeders and taking part in citizen science projects like Project Feederwatch.

However, there are pros and cons to consider when putting up birdfeeders. Before you head to the store for a pound of birdseed, consider the proper care needed for the feeder, what type of feeder you’ll set up, the type of food, and whether your backyard has been bird-proofed for safety. For example, putting feeders too close to windows can enable window strikes, and having a house cat that prowls the backyard can threaten the safety of the birds.

Unfortunately, the beautiful Varied Thrush is in steep decline across North America thanks to the destruction of their old-growth forest habitats.

Habitat loss is an issue that affects not just thrushes and birds, but all wildlife. While individuals can’t save habitats on their own, concerned citizens can band together and make a difference.

If you are passionate about conservation and sustainability, sign a petition, volunteer with an organization, or write to your local representative. Some BC organizations dedicated to saving habitats include the Sierra Club BC, the Wilderness Committee, and the Ancient Forest Alliance. The Tyee also did a recent series on conserving B.C.’s old-growth forests, so stay informed.

If you come across wildlife in distress please call Wildlife Rescue Support Centre at 604-526-7275. If you want to help support your local wildlife please share your contributions here.