The Western small-footed bat is a member of the large and widely distributed Myotis within the bat family. With its black mask on its face, ears, and forearms and beautiful wings made of stretched membrane this small bat weighs approximately 3.5 to 5 gm. The female is usually larger than the males, both with yellowish-brown fur with some white and pale underparts. As the name indicates the feet are usually small and half the length of the wing. 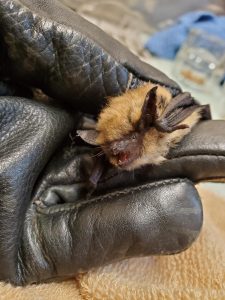 Western small-footed bats are erratic, slow flyers, and do not navigate far seasonally or during their lifetime. They focus their early morning foraging around vegetation along the edges of rocks

The small-footed bats are insectivores and require a protein-rich diet including small insects, large beetles, moths, true flies, beetles, and caddisflies. These bats are opportunist feeders and forage food early in the morning after sunset or later than some of their similar bat species.

These beautiful create communicate and perceive the world around them through their vision during the day and echolocation nocturnally. They also communicate in communal roosts with their distinct auditory calls, touch, and smell.

Last week, Wildlife Rescue hospital admitted a small Western small-footed bat after a concerned individual found the bat hanging 10 feet up a wall in a commercial building. The finder observed the bat ensuring no contact with humans was made but noticed the helpless bat had not flown away or left for 24 hours. The finder did notice movement and took the right safety protocols and brought the distressed bat in our care.

Upon the initial health check, Wildlife Rescue technicians found the bat dehydrated, weak and it had pollen around the ears.  It needed supportive care and rehydration. The bat has since become stronger and showing signs of recovery.

This is a unique species at Wildlife Rescue and has not been its care in the 40 years of operations. It is not known to live within the lower mainland but instead in the dry interior valleys of B.C. Working with the regional biologist and bat specialist we are assessing what and how the bat has come to the lower mainland and if this species will continue to expand their habitat or it is a lone individual in the wrong place.

The Western small-footed bat finds homes in nearby rivers, steep valleys, and cliffs because they rely heavily on sources of water. These bats are unique because they do not roost in trees but instead choose cliff faces and rocky outcroppings. In the summer times, the bats will change their roost sites to crevices and cavities to escape the beaming sun and enter a daily torpor to conserve energy. They also use human-made structures like buildings, abandoned residential spaces, and bridges.

A unique system of polygynandries, keeps these bat populations alive, which is a mating system where the male and female both having multiple mating partners during a breeding season. Mating takes place in the fall; reproduction can begin as early as June or July and when the male reproductive glands enlarge. The mating happens before hibernation and the female will store the sperm until spring. The gestation time is 1-2 months and typically one offspring is produced per mating couple. The offspring usually weigh as low as 1.1 to 1.6 grams and take an average of 5 weeks to reach their sexual maturity. A Western small-footed bat is known to live up to 12 years!

The Western small-footed bat is known to be more solitary than most bats. They do not have a preference and can prefer to roost alone or in smaller groups. These bats change roost sites frequently but avoid traveling a great distance.

Because these species require sources of water and are associated with arid environments, they face challenges with loss of forests, lack of flooding caused by water control, abandoned mines without adequate surveying, and poisoning possibilities.

Maternity colonies should be protected from disturbance. Old trees and snags serve as day roosts and diverse habitats provide adequate foraging habitat for these unique bats.