A familiar sight on British Columbia’s coastline, gulls are both a staple and a nuisance to those in public places. No matter your stance, we can agree that gulls are a crucial part of BC’s ecosystem and biodiversity – a part that keeps the population of their prey (such as fish) in line. Canada Geese are also an important part of British Columbia’s ecosystem since their method of gathering food (grazing) spreads seeds and allows plants to grow. These two bird species are seen nesting on rooftops in the lower mainland this time of year, where they have adapted their natural nesting behaviour to large buildings and busy cities. 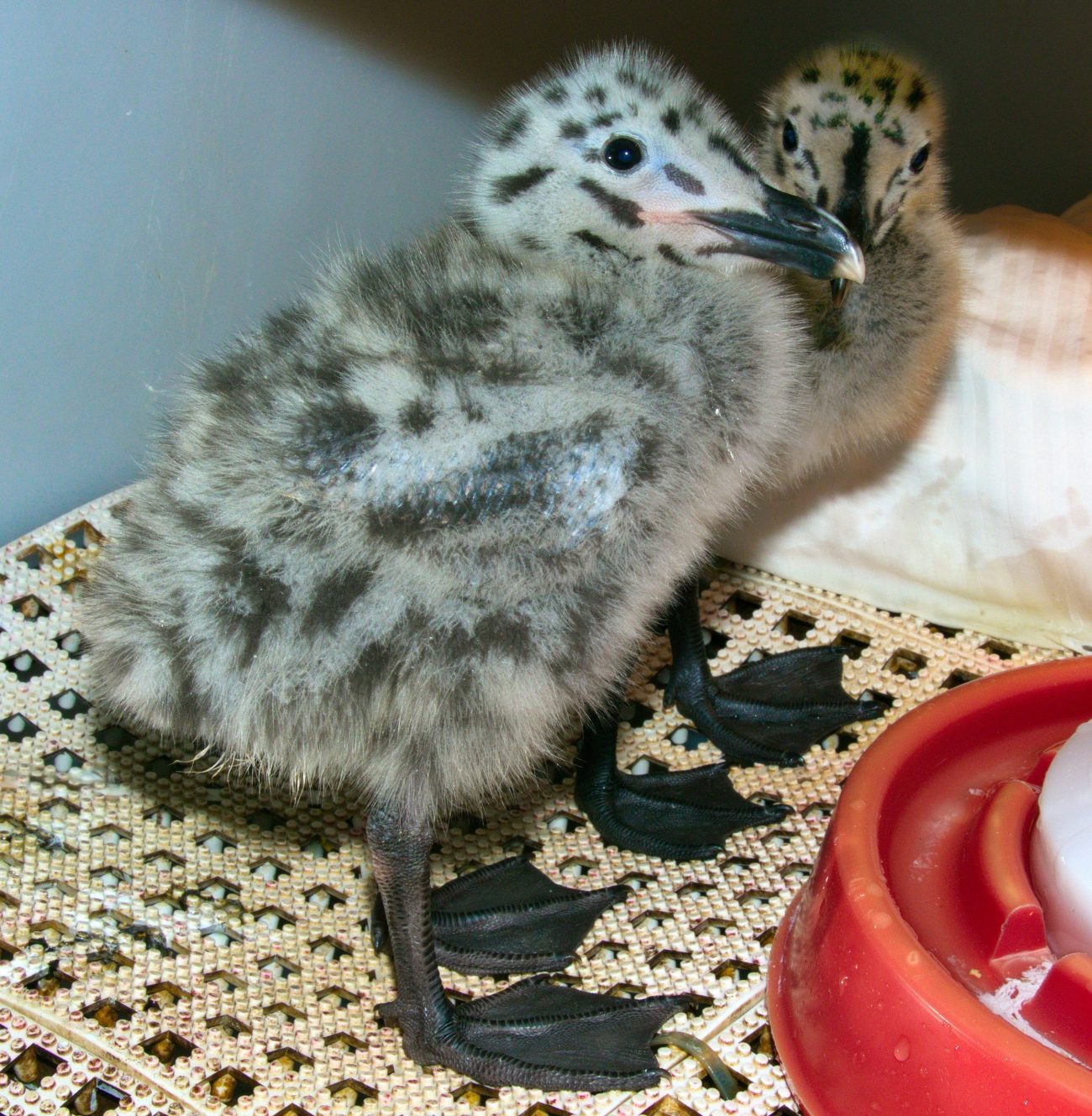 To stay close to their food source, gulls will nest in areas near water, often disguising their nests to avoid predation. They choose spots such as grey rooftops and black gravel. Both male and female gulls work together at this time – searching for a nesting spot on the ground or perched on a structure such as a roof or a wharf. During nesting season, parents will typically perch higher than the nest to keep an eye out from above for possible predators. They only leave their babies to gather food for them. This lasts for approximately 3-5 weeks. Many gulls, including Glaucous-winged Gulls, will feed their young until they are fledglings – at which point the young start to fly and begin foraging by the ocean. Ideally, if the nest site is on a rooftop or high perched area, the young gull only leaves the nest/rooftop once they can fly and find food on their own. Often, the young gulls glide down from their nesting site to ground level where the parents continue to provide food for them until they can fly.

Canada geese also nest on the ground or rooftops with their goslings; however, they prefer unobstructed views of the water. Canada Geese have found other places to nest as well – it is common for them to nest in open spaces with green or gravel rooftops – but no matter what, they need to be near water which they need to survive.

For female Canada Geese, nest construction can take quite a bit of work. Females will select a site for her nest and will then build it. After doing so, she will incubate her eggs while the male stands guard. Once her goslings are born, they leave their nest within a few hours to a few days. They follow their parents to food and water sources and find hidden areas to sleep and rest.  If the parents have chosen a nest on a rooftop, they will encourage their young to jump to the ground, no matter how high the building. The juveniles are built for this, they have soft and pliable bones within the first couple days of birth, after that, their bones harden and become stronger. Therefore, the birds have their best chances of survival leaving the nest within a few days, as soon as they are bright alert and able to run.

The juveniles can stay with their parents for a year before branching out. While much of the goose population does migrate, the distance they travel can vary. Many Canada Geese who reside in the lower mainland will travel shorter distances to their wintering grounds compared to the geese that live in the north.

Gulls face many obstacles in the wild which can cause harm and even death. Wildlife Rescue witnesses a wide range of injuries or obstacles that need specific and unique medical attention. The most common reason juvenile gulls need help is when they are orphaned, which causes dehydration and starvation because parents are not around to provide important nutrients. Depending on the length of time the animal has been without food or water affects the amount of rehydration, and nutritional supplementation it needs. Blood work and other clinical diagnostics can tell what type of treatment is needed. Gulls often become trapped on small, lower balconies when learning how to fly from the rooftop, and they have limited room to hop out.

Once on the ground, they face urban challenges including busy streets full of people, cars and bikes, all potentially harmful for these animals. If the animal has been hit by a car or bike, they often suffer broken bones and other internal traumas. These injuries require intensive medical treatments including splints, wraps and medications. When the juvenile gulls recover from their injuries and ailments, they are placed together in a “gull nursery” where they socialize with one another and have supplemented heat and shelter. Eventually, they have pool access to swim and enough space to learn how to fly. They are then released in newly made ‘family’ groups in a natural environment away from bustling human activity.

Since it is possible for gulls to imprint and habituate on humans, avoiding interacting with the young gulls is necessary. Therefore, Wildlife Rescue staff and volunteers will wear gear to prevent imprinting while caring for the juvenile gulls to avoid them from associating humans with food or worse, not having a natural fear of “predators” such as humans.

The jump the goslings must make early in their life from a rooftop onto concrete pavement can be very dangerous. Wildlife Rescue has rescue teams to assist geese and keep the families together. When gosling is not able to jump or the situation is too dangerous, the rescue teams help them down and bring the whole family to a suitable body of water nearby.

Gulls and geese are two birds that face a variety of obstacles – and while they may seem similar in their rooftop nesting habitats, they are quite different. By avoiding feeding, them and only interfering when they need to be rescued, we can make sure they are successful in the wild and not a nuisance to public places.

Sometimes these birds need our help – but often they do not. So how can we tell? If you see a young gull or gosling that you think needs help, consider the following to see if it needs help. Our Wildlife Support Centre can help you assess the situation.

If you see a bird that has exposed bone or blood, bugs or insects covering it, no feathers, or a bird that is sleeping, human intervention is required. Call Wildlife Centre’s Support Centre at 604-526-7275, but make sure to never offer food or water to them – they can go without it, and it may end up harming them.