The most common crow sighting in British Columbia you will see along the shorelines is the Northwestern crow. Unlike American Crows, Northwestern Crows are smaller with a deeper voice and are often found along beaches, islands or at landfill sites searching for scraps of food. These large passerines have a long, thick bill, broad wings, and a moderately long tail. The highly sociable birds communicate visually when in flight or through their distinct calls. They soar beautifully in the sky and play with each other on the wing, chasing and swooping one another aggressively. 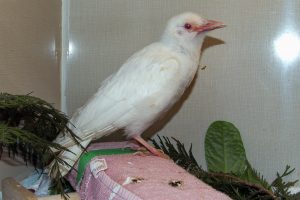 The diet of the Northwestern Crow is well-rounded consisting of both plants and animals including small vertebrates, eggs, nestlings, blackberries, salmonberry, seeds, carrion and even garbage. These birds forage on the ground solo or with a flock, watching their prey from a distance beforehand. These birds are known for stealing food from other birds especially gulls and auks. Sometimes ever-changing environments pose challenges when they are fighting tides during the day, but these intelligent birds will capitalize on food sources and store excess food for the next day.

Northwestern Crows form long-term bonds, males perform a flight display when luring the female crow by drooping and quivering his wings and tail while bowing, the female then responds in kind and crouches down. When Northwestern Crows are preparing to breed, the male and female scout several sites together before choosing a concealed spot in a tree, shrub or on the ground against a tree and away from predators. Both parents incubate the eggs and care for the young, males often bring food back to the female during and before incubation.  The female will use branches up to a foot long and put together a nest lined with grass, moss, bark, leaves and feathers. The clutch size is usually around 3-6 eggs and only 1 brood per year. The helpless nestlings with minimal vision require their parents to help to survive the early few weeks.

After breeding season, Northwestern Crows gather in large flocks foraging, resting, and roosting together. It is known that these crows of an internal hierarchy and dominant individuals claim the best food and perches.

This week, Wildlife Rescue technicians are working hard to provide care to a rare fledgling Albino Northwestern Crow. A kind-hearted Samaritan rescued the young fledgling from North Vancouver. The finder acted in a timely manner and brought the vulnerable fledgling to seek immediate medical attention, knowing he would be picked up by predators because of his distinct coloring. An extensive health check determined he was orphaned with minor injuries in the rare bird, underweight and dehydration. Wildlife Rescue is working with regional biologists to understand and learn how to safely return this vulnerable bird to the wild. They are assessing its feathers for strength and structure, as non-pigmented feathers can often have reduced stability and strength which can increase its risk damage and breaking, which could cause issues for flight, thermoregulation and waterproofing for the wet winters found in B.C.

For the next couple of weeks, staff and volunteers will ensure the bird has supportive care, nutritional supplementation, will teach and encourage it to self-feed on natural foods and prey and show signs of healthy skills needed to survive in the wild. They are also encouraging bonding between it and other crows to allow for proper integration into a flock. Of course, his genetic mutation makes these skills critical to learn and practice.

Albinism is a genetic mutation that prevents the production of melanin in the body. The white crow has white feathers, pink legs, and eyes. The only color in the eyes comes from the blood vessels from behind the eyes.

Albinism in birds brings many challenges. Their distinct look separates them from their own kind and attracts predators who can spot the unique species on the ground or while in flight.

If you are interested in learning more about Wildlife Rescue, or how you can help provide care to injured and orphaned wildlife please contact our helpline at 604-526-7275 or you can give today, and ensure wildlife like the Albino Northwestern Crow have another chance in the wild.