Trumpeter Swans: A Fight for Survival

Trumpeter Swans are one of North America’s most elegant wild species. They are instantly recognizable by their striking snow-white plumage with contrasting black bills. These majestic birds once nested over the majority of wetlands across North America, however, numbers began to dwindle at an alarming pace as civilization advanced westward in the early 1700s. Market hunting and feather collectors depleted the number of Trumpeter Swans so severely that by 1930, it was estimated that there were fewer than 100 of them in existence. As a result of heightened conservation efforts, including protection from hunting and human disturbance, this species has recovered strongly in recent years and the population of these birds is now estimated at over 60,000.

Despite this wonderful success story, the Trumpeter Swan still faces numerous threats to its existence. Among others, lead poisoning as a result of the ingestion of ammunition pellets left in old hunting grounds and fishing tackle would have to be considered one of the most sinister threats that this beautiful bird faces today.

Lead shot ammunition has been used by bird hunters since it was introduced in England during the late 1800s. These types of pellets are extremely toxic to natural environments and detrimental to wildlife, especially waterfowl who ingest the pellets when foraging in the shallows for food. While lead shot, hunting has been banned for waterfowl hunting in Canada and the US since the early 1990s, the catastrophic effects of this widespread pollution is still being felt to this day. Lead never breaks down and will always be killing our wildlife.

Trumpeter Swans are particularly susceptible to this form of poisoning due to their long necks and subsequent ability to feed deep in the shallows where spent lead ammunition has settled into the roots of water plants that they feed on. These birds often swallow stones or pebbles to help with digestion and are accidentally consuming the lead pellets when feeding. Even though these are immense birds, with full-grown males weighing an average of 25-30 pounds, it only takes as few as 3 ingested lead pellets to be fatal to an adult Trumpeter. Once ingested, the bird will slowly succumb to kidney failure, central nervous system malfunction and intestinal complications over a two to three-week period. 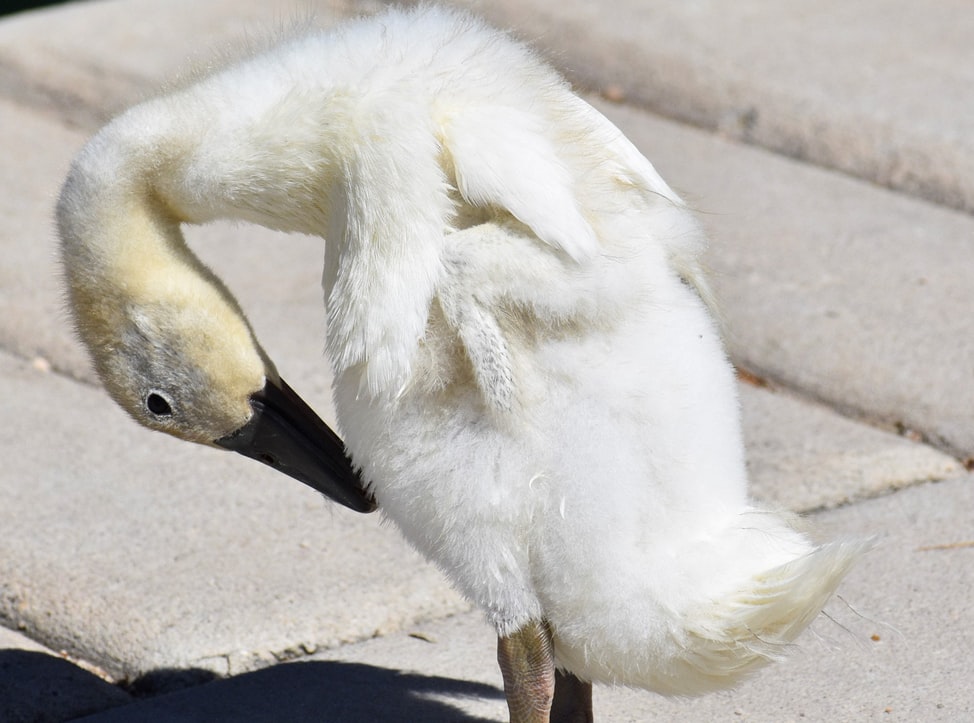 Trumpeter Swans are dying in unusually high numbers from lead poisoning in the Pacific Northwest of the US and Canada, and in Southern Ontario. The Canadian Wildlife Service estimates that in the greater Vancouver region alone, more than 2,500 Trumpeter and Tundra Swans have died from lead poisoning in since 1999. Likewise, in Southern Ontario, there has been an uptick of known cases of Trumpeter Swan fatalities from lead poisoning in recent years. These deaths have been linked to the declining water levels in some of the larger lakes in the region. As the water levels decrease, the swans are being exposed to submerged lead that would have previously been too deep for them to access.

It is impossible to estimate just how much lead ammunition remains in wetland areas across North America. Equally difficult is the task of locating and removing these pellets from their submerged resting spots. As such, the Wildlife Rescue Association is focused on supporting Canadian Wildlife Service by treating the affected birds, as well as ending the horrible suffering if conditions are irreparable. In addition, Wildlife Rescue is working to educate the public about these ongoing issues to help stop all forms of pollution.