Welcome to the first edition of Wildlife Rescue’s newly minted triple-R series, which stands for Rescue, Rehabilitation and Release.

This series focuses solely on “complete” stories of a wild animal’s time with us. In each post you’ll get to read and see for yourself through photographs and videos the entirety of the rescue process, the rehabilitation required for each animal, and finally to the release of the creature back to its home – the wild.

If an animal is not featured in this series it is because we did not think there was enough evidence of its time with us to justify its placement. That means you will only be getting the best of the best. An exclusive and deeper look into the intense and skillful work done here each day at Wildlife Rescue.

As a non-profit organization we are only able to do this work thanks to the generosity of our donors. If you are inspired to donate before or after reading this post you can do so in a number of meaningful ways, including our popular monthly giving program which you can learn more about here. 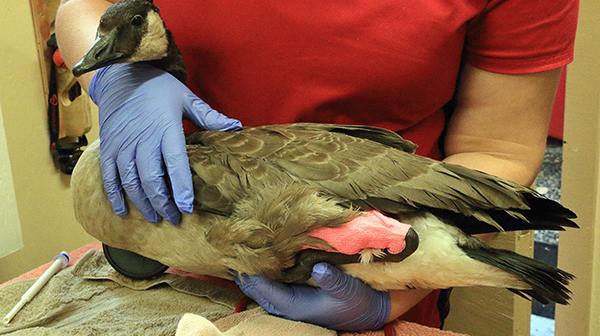 It was a cloudy morning on Sunday, September 10th when the Wildlife Helpline got the call. A goose was screaming in pain on a piece of property near a lake in the Lower Mainland with something sticking out of it.

The helpline organized the rescue team who responded to the call. They approached the injured animal, placed it safely inside of a kennel for transfer, and brought it back to the hospital where the goose had to undergo emergency surgery to remove a wooden stick found pierced in its leg. 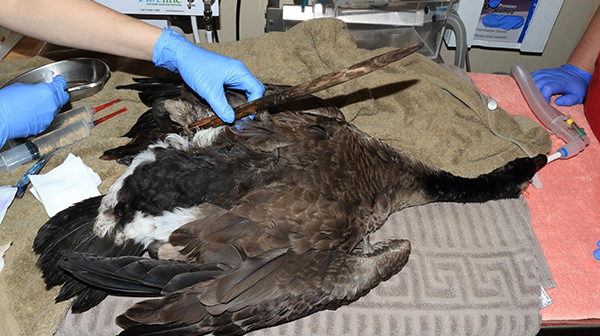 The bird needed to be sedated for surgery and the Wildlife Technicians had to move fast to remove the stick. Once it was taken out, they assessed the damage and had to decide if the bird could be saved. They did not know at the time if it could or not, but they decided it was worth the chance. They applied medical ointments for the necrosis and potential infection and bandage wraps to the wound. Finally, it was placed safely inside of a warm building at Wildlife Rescue to recuperate from the ordeal. 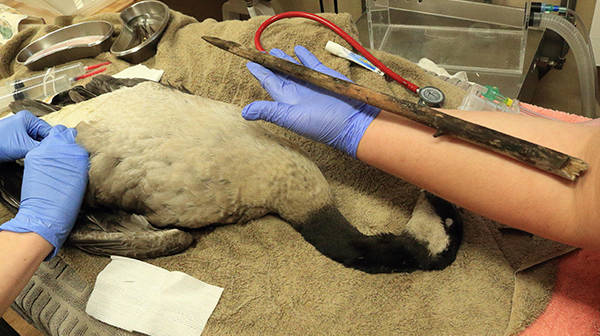 At this point you may be looking at the stick and wondering how it managed to get stuck inside the bird.

The truth is we do not know for certain since no one saw what took place. But we can deduce the probability of what happened, and sadly, this goose looks like it was attacked, intentionally, by a person. We can judge this based on the angle of the wound, the depth of the plunge, and the unusual shape of the stick, as pictured.

Luckily, many more people cared about this animal than did not and over the course of September the goose was given daily examinations, medications, food and shelter. It was touch and go, with some days looking better than others, leaving its prognosis undetermined for a number of weeks.

Yet, at the end of the month, it had pulled through. The goose was able to start walking on its own again, self-feed, and even swim in the outdoor aviary pen at Wildlife Rescue.

Some would say it was even looking a little spry. 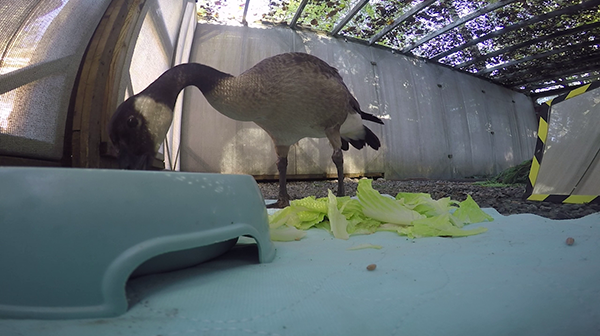 By early October the Wildlife Hospital team announced the bird was healthy enough for release back to the wild.

They got in touch with the finder who first found the bird in pain. They wanted to be there when the goose was released, to see how the animal looked now, happy and healthy.

The finder, the volunteer release team, and staff all went together on a beautiful morning in October back to the lake where the bird was found. Together, the team and the finder walked down to the lake and opened the kennel door up for the bird. It was hesitant at first, but eventually took its first few steps out towards the water and stretched its wings.

This is when the magic happened. 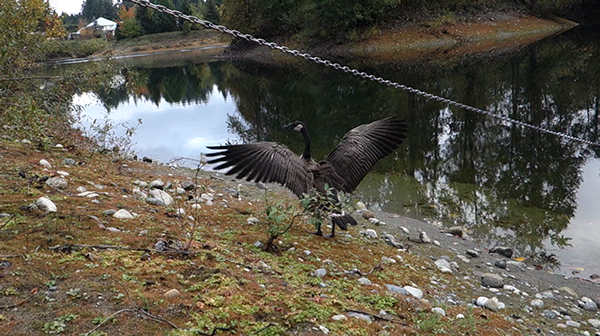 The young goose took a quick step down to the water and gave a small honk. Then suddenly, like it was a movie, its family emerged from behind a small inlet around a bend of water. They started honking back and forth to each other, like old cherished friends meeting again for the first time in ages.

The team left them then. Happy, healthy, together, in the wild.

Don’t just take our word for it though. Watch the video linked at the top to see first-hand the events that transpired. From surgery to rehabilitation to release.

A huge thank you to all who helped make this animal receive a deserved second chance at life. It came to us in pain from the anger and violence of another person, but there are far more of us who would rather help than harm.

If you are inspired to donate please click here to support Wildlife Rescue. We can because you care.