The spookiest night of the year is coming soon! While we here at Wildlife Rescue are big fans of all things that go bump in the night, we’d like to take a moment to help you make sure your moonlit rituals, haunted houses and sunken crypts are as safe for wildlife as possible!

Artificial Spider Webs
While artificial spider webs are a great way to add some creepy ambiance, they are a major hazard for wildlife. Every year we take in animals who have been entangled in these decorations. Sadly, many people discover these trapped birds, bats and squirrels when they are taking decorations down after Halloween and by that time it’s often far too late.

Treats
It’s not Halloween without Trick or Treating! Unfortunately chocolate and other things we humans find delicious are deadly to pets and wildlife, plus individually wrapped treats leave a lot of waste behind that can seriously injure animals.

Pumpkins
Carving a Jack o’ Lantern is a favourite activity for a lot of people to celebrate Halloween. A lot of hard work goes in to making those creepy grins. However, pumpkins can be a temptingly tasty treat for wildlife like deer or racoons. It might be tempting to try and dissuade animals from eating your pumpkins with chemicals or other deterrents, but this often leads to animals becoming seriously ill.

Fireworks
Fireworks are loud, disruptive and frightening to pets and wild animals alike. Not only that but launching them into the air can seriously injure or even kill flying birds and bats. Even the most diligent fireworks operator likely won’t be able to clean up all the refuse left behind from a fireworks display, and a lot of trash can be left behind for animals to find. 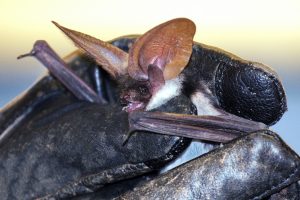 Going Batty on All Hallow’s Eve

Here’s a fun idea for an event thanks to BC Bats. Organize a bat count! When the sun goes down bat activity is at its highest. Take yourself, your kids, some friends and your trick or treating candy to a quiet area near a bat roost and start counting!