Have you seen the Northern Saw-whet Owl?

Traipsing around a mature forest near a river, you spot a small, hunkering puffball in the dense foliage. It’s standing stock-still as if any slight movement will betray its presence. You look closer and see two bright, amber eyes staring fiercely back at you. 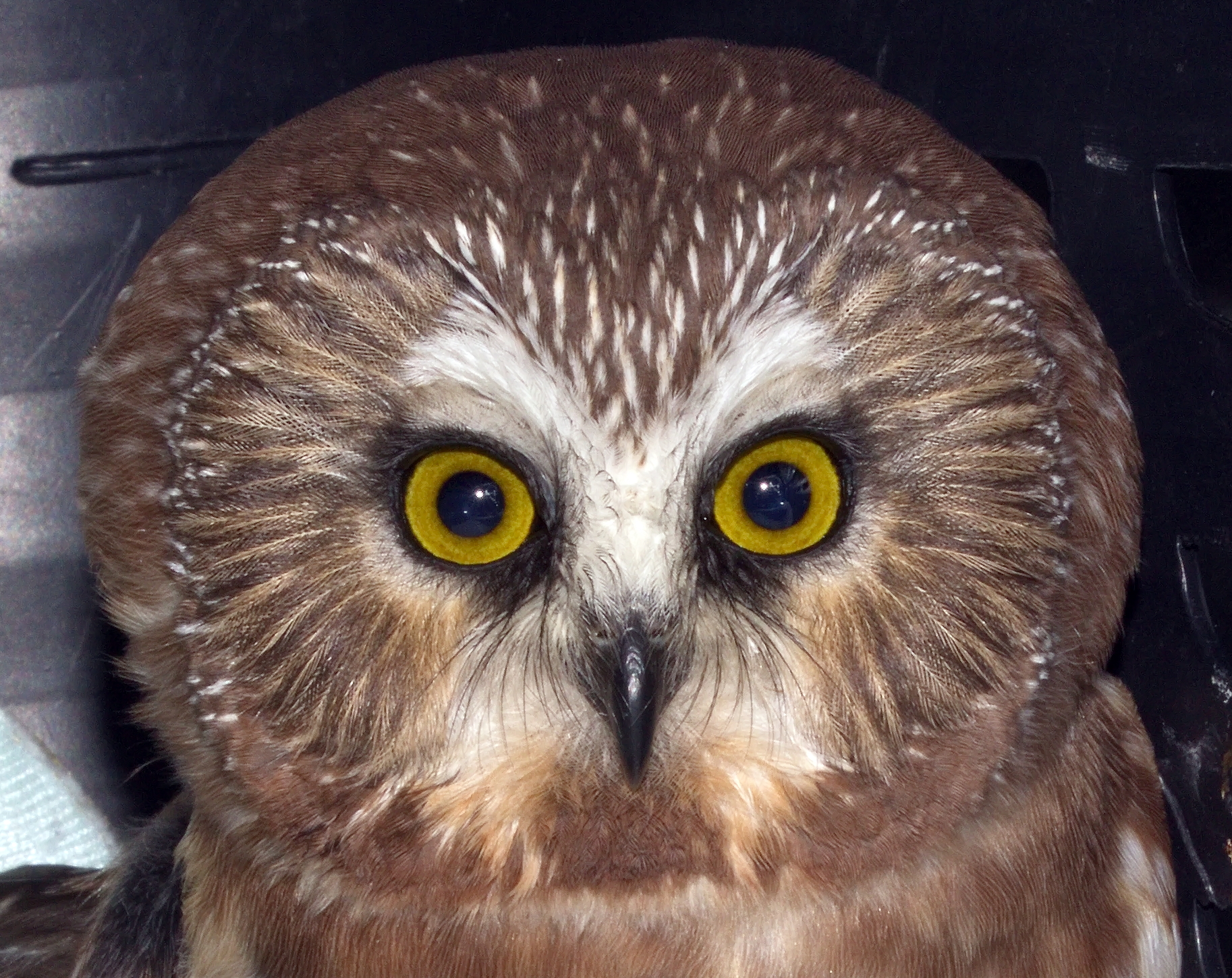 Later, when you leave the area, you hear a high-pitched, rhythmic tooting that sounds almost like electronic beeping. You were right: you were lucky to have spotted a Northern Saw-whet Owl!

What are Saw-whet Owls?

The elusive Northern Saw-whet Owl (Aegolius acadicus) is a small, fierce-faced raptor who makes its home in a variety of habitats—mostly forests—in North America. The etymology of its name is uncertain, but it is widely speculated that these owls are named after their call, which sounds like a saw being sharpened against a whetstone.

Due to its small size and densely foliaged habitat, these birds are notoriously difficult to spot. They have eluded researchers in the past, who originally thought these owls didn’t migrate (they do). Today, scientists are still unsure of their precise population trends.

On October 27th, a concerned homeowner found the injured owl laying in his backyard patio having trouble flapping his wings. The finder knew immediately to call Wildlife Rescue and seek help to save this poor owl.

Although the examination indicated healthy weight and hydration the owl is suffering from uneven pupil dilation and slow response to light-testing. These injuries sustained are clear signs of a concussion from a potential window strike.

Like many wildlife, rehabilitating Saw-whet Owls is notoriously difficult. For example, it can be very difficult to gauge the comfort and health of wild animals because they don’t like to express pain (doing so makes animals an obvious target for predators). 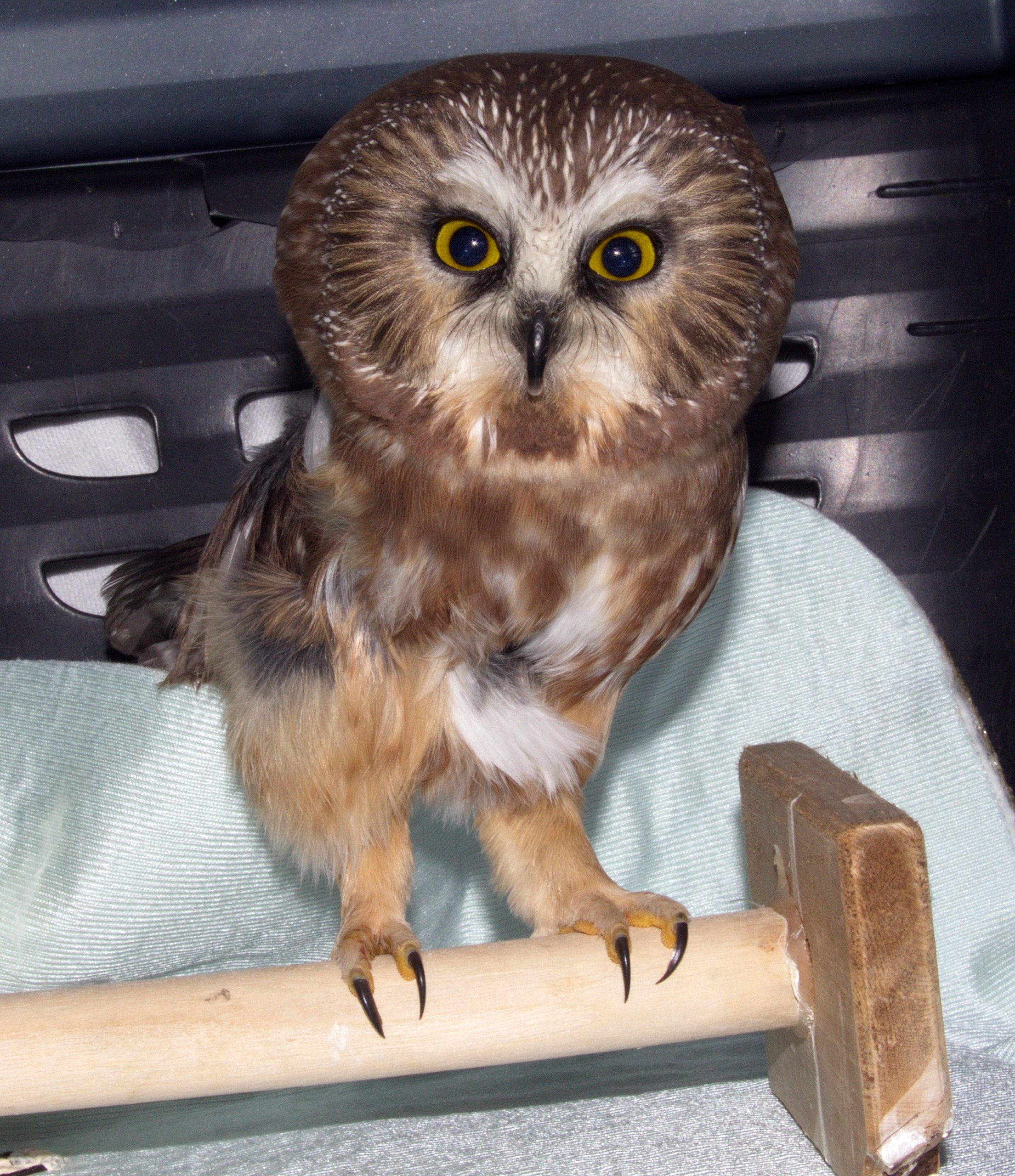 Despite their general low conservation concern, Saw-whet Owls aren’t immune from danger. These little bundles of flying ferocity face a number of threats…..

Aegolius acadicus brooksi, a Northern Saw-whet Owl subspecies native to Haida Gwaii, have been designated as threatened since 2006. This subspecies can be distinguished by its darker plumage and a big size difference between the sexes (female birds are significantly larger). Unlike other Northern Saw-whets, the brooksi does not migrate.

The decline of the brooksi subspecies can be blamed on declining habitat quality. These owls tend to prefer mature forests, which are often sites of wood harvesting. They also depend on nesting cavities left over by other species like woodpeckers, so threats to woodpeckers also affect Saw-whet Owls.

Finally, the introduction of other species into the Haida Gwaii, such as Sitka Black-Tailed Deer, threatens the brooksi sub-species because they alter the habitat with their foraging habits.

Some poisons have long half-lives and may take a few days to kill the targeted pest. This means that by the time a predator like an owl eats the pest, it will ingest an enormous amount of poison.

If you have a pest problem but also love birds, consider alternatives to rat poison. Use mechanical traps that kill rodents instantly (avoid glue traps—these are terribly inhumane). Better yet, see if you can attract a raptor to your backyard who can act as a free, resident exterminator!

Birds may mistake transparent glass windows as surfaces they can fly through. Humans can help prevent window strikes by using window decals, blinds, turning off lights at night, and installing netting or screens.

As you can see, Saw-whet Owls are fascinating and adorable birds, but they are not entirely free from danger. The next time you hear tooting in the woods, or see large amber eyes staring back at you, think about what you can do to be better neighbours with these nocturnal hunters.

If you come across wildlife in distress please call Wildlife Rescue Support Centre at 604-526-7275. If you want to help support your local wildlife please share your contributions here