The spring and summer is one of the busiest times of year for newborn wildlife, but unfortunately outdoor cats too often cause these creatures their chance at life.

Wildlife Rescue has already taken in several injured animals this year due to cat attacks, including our most recent arrival – a 1.6 gram Little Brown Bat. It was found clinging to its mother’s back who had passed after succumbing to its wounds from a cat attack. In addition we’ve seen a Black capped Chickadee, several American Robins, House Sparrows, Hummingbirds, and more all due to cats.

Extracting from our most recent data ~20% of our summer intake is due to cat attacks as we’re getting an average of six (6) arrivals per day from this matter. That’s a very high amount and it’s entirely preventable.

In addition, a 2013 study by Environment Canada lists cats as the number one killer of birds in Canada. Conservationists have echoed these concerns, asking owners to keep their cat indoors and away from harming wildlife.

The Little Brown Bat will now undergo an intensive care program at Wildlife Rescue as it needs proper food, shelter and attention in order to survive this fragile time in its life. This means frequent feeding rounds and emulated grooming it’s mother would have provided, in addition to warmth and humidity from its specialized enclosure provided on-site at Wildlife Rescue. That’s a lot of time and resources spent on just one of the hundreds of cat attack victims Wildlife Rescue will see each year.

To learn how you can help, here’s a list of a few simple things you can do to prevent cat attacks on wildlife. 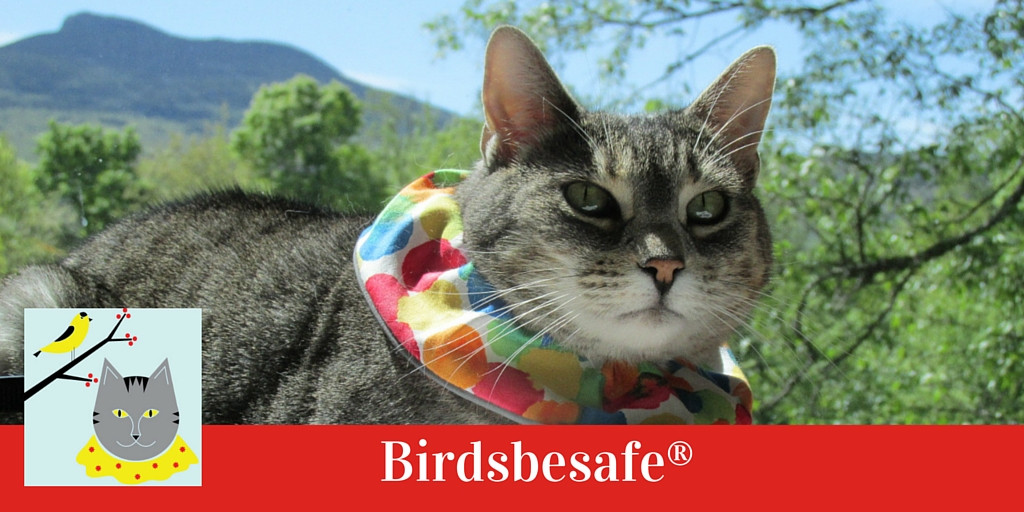 Cat bibs are simple and cost-effective. This $15CA item you can pick up from the BC SPCA, several pet stores, or ordering online, is an easy item to place around your cat’s neck when you want to let your cat roam free outside and still prevent it from killing animals.

It stops the cat from being able to effectively use its claws as a weapon. Wearing this bib is one of the most popular ways to let your outdoor cat roam freely while minimizing its damage to nature.

The scrunchie is similar to the bib in that it wraps around your cat’s head like a collar, but it’s not as limiting. It allows the cat to still use its paws, but gives warning to birds about its presence.

Cats rely on stealth while hunting, often crouching and hiding in tall grass or trees. The cat scrunchie is typically very colourful allowing the birds to see the cat before it can get too close. While it’s not 100% going to stop attacks, it has been proven to greatly reduce the risk of birds being caught off guard.

These can be ordered online or contact your local pet store to find if they carry one.

The truth is owners may feel like they’re limiting their pet’s life experience by keeping them inside, but for a cat the benefits are fantastic. It prevents them from:

If this is not an option, please consider keeping a cat indoors at the very least for spring and summer when nature produces the most newborn birds to allow them a better chance at life.

Place Bird Feeders and Fountains Away From Home

If you have a bird fountain or feeder and an outdoor cat this is a recipe for disaster.

Any feeder around a home with a cat should be kept a good ways from the house and near plenty of trees and shrubbery to allow them a place to hide/escape. Still, be sure to not allow your cat outside while you have these items on the property.

If you or anyone you know has found an injured animal due to a cat attack please contact your local Wildlife Rescue centre, or if you’re in the Metro Vancouver area please contact us directly at 604-526-7275.