Two months ago, in early April, 2017, a raven was found near Ambleside Park in West Vancouver. It was grounded, lethargic and bleeding outside of a Starbucks.

One concerned citizen called into Wildlife Rescue where a team was sent out to rescue the large, black bird. It was brought in without much trouble as it didn’t have the energy to fend off or fly away. 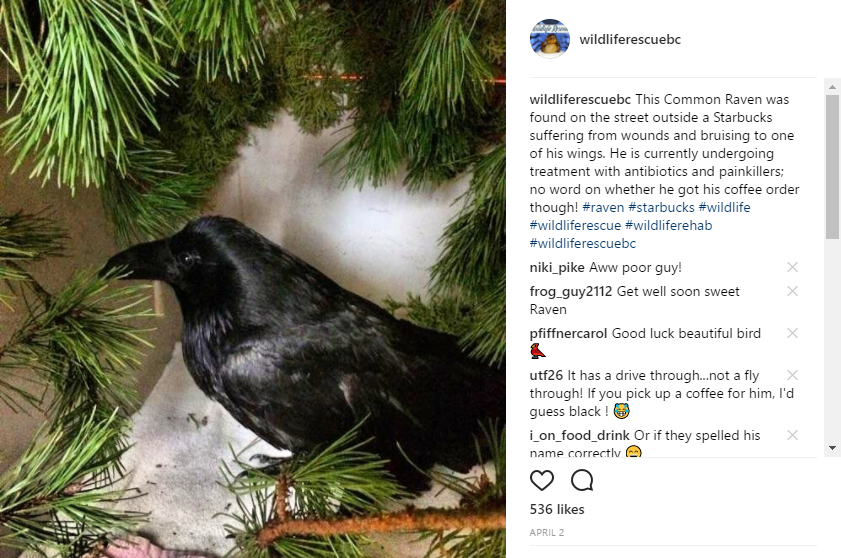 The initial social media post we made about the raven when it arrived to us in early April, 2017.

Immediately it didn’t look good. The initial examination showed the raven suffering from a laceration on its right wing. There was scabbing, swelling, and blood pooling in its mouth. Believed to be an injury from a window strike or a predator attack, the team here got to work. It was given medicine to stave off the infection and ease the pain. Normally this would be the kind of case we could handle, but due to a complicated hospital situation where the main building was closed down, it was decided this creature wouldn’t receive the best care on site, and we contacted our friends and partners at Wild ARC on Vancouver Island – complete professionals and experts in the bird care field.

Norm Snihur, a volunteer with Wildlife Rescue and helicopter pilot, took the bird for us from our headquarters in Burnaby all the way to Vancouver Island to receive the care hospital staff knew it needed.

It didn’t look good, but Wildlife Rescue Hospital Manager Karen Becker had a good feeling about it.

It arrived at Wild ARC on April 3, 2017, where it still had a large scab, bruising and indentation on its furcula. Its body condition was considered fair, and its behaviour indicated it to be alert. Good signs in any injured animal.

The raven then received care for two months straight. It received daily check-ups where its wounds were examined, and it was given a diet where it was noted to have thoroughly enjoyed pieces of meat. By April 9, the raven was showing signs of improvement: the dorsal incision was looking good, wraps were being cleaned, and it was steadily eating food. The prognosis was improving.

Throughout the next couple weeks the raven had its ups and downs. One day it would be eating great, the next it would be leaving items and having some not-so-great bowel movements that could have been due to the stress of the situation.

At 6 p.m. on April 25, a Tuesday, it made an escape attempt out of its brooder by trying to literally pick it apart.

The next day it was transferred to a temporary kennel location while staff demolished the brooder and looked for a better location.

A few more weeks go by of a steady diet and check-ups where the raven first showed signs of hopping well, and by May 16 it was decided to move the raven to a larger enclosure where it would have the space available for flight exercises.

Then on Monday, June 5, the raven was ready for release and was flown back to us by Norm so it could be released into its home of West Vancouver (it has very expensive taste, apparently).

Finally, on Tuesday, June 6 the raven was released back to its natural home by the very first caretaker it had – Karen Becker.

Wildlife Rescue is incredibly proud of its staff and volunteers who helped bring in the injured bird, and without the help by the fantastic team at Wild ARC this bird wouldn’t have received a second chance at life.

Wildlife Rescue is a non-profit organization dedicated to the rehabilitation of wildlife affected by human activity and to provide education to the public on co-existing with urban wildlife.

If you would like us to continue this line of work, please consider making a donation! Learn more here.

Posted in Wildlife Stories
Tags: animal rescue, before and after, bird release, raven