Sarah and Sam the Snow Geese

Snow Geese are a type of animal we only see in winter at the Wildlife Rescue. Can you guess why? The answer is because they migrate!

Migration is the movement of a group of animals from one place to another. Animals migrate for many reasons, but Snow Geese migrate because it is too cold and there is not enough food in Siberia and the Canadian Arctic, where they spend summers. Sometimes these amazing geese can fly all the way from their summer homes in less than two days! 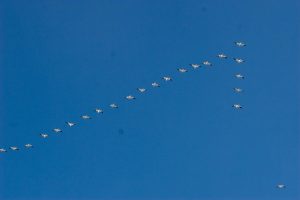 No wonder, then, that two snow geese came into the Wildlife Rescue in November looking very skinny and very hungry. The first to visit the Care Centre, Sarah, was fully grown and found in Vancouver at English Bay. She was so tired and hungry she could not even hold up her head when she came in. The Wildlife rescuers were very nervous that she would not recover because for days they tried to help her but she only kept getting more sick. 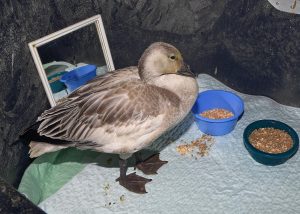 Two weeks later another juvenile snow goose, Sam, came to the Wildlife Rescue. He was also tired and hungry, like Sarah. After flying so far away he would not have sur­vived on his own without help from the Wildlife Rescuers. Snow geese love their families: they mate for life and children migrate with their parents. This gave the Wildlife Rescuers an idea. They put Sam in the same enclosure as Sarah to see if having company would make her feel better. Sure enough, she immediately started improving.

Sam loved following Sarah around and doing what she did. When she swam, he swam. When she ate, he ate. Two weeks later, Sarah and Sam were able to be released weighing almost twice as much as they did when they first came in! 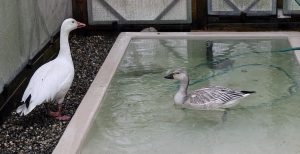 We hope they live happily ever after.