There are Gulls nesting on our rooftop! What should I do?

What are some common reasons a young gull would be admitted to Wildlife Rescue?

When is intervention needed?

How do you determine a Gulls age?

There are Gulls nesting on our rooftop! What should I do?

Leave them alone! It is a federal offence to tamper with a gull nest.

Every July and August, “Gull Season” occurs in the Lower Mainland of British Columbia. Gulls like to nest on flat rooftops in Vancouver. To stay close to their main food source of fish, gulls will nest in areas near water. These rooftop sites are typically safe from predators – humans included!

Gull parents will only leave their babies to gather food for them. Gull nestlings are semi-precocial, they hatch with downy feathers, eyes open, and can walk around shortly after hatching. However, they do not feed on their own like fully precocial babies (goslings and ducklings), rather they rely on their parents for food and remain in the nest for a number of days.

Ideally, if the nest site is on a rooftop, the young gull only leaves the nest/rooftop once they can fly and find food on their own. Often, the young gulls glide down from their nesting site to ground level where the parents continue to provide food for them until they can fly.

What are some common reasons a young gull would be admitted to Wildlife Rescue?

When is intervention needed?

Intervention is required when: 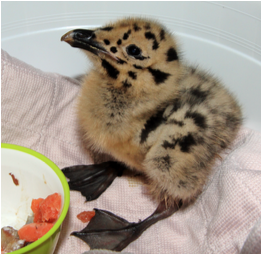 Covered in fluffy down feathers, spotted all over. 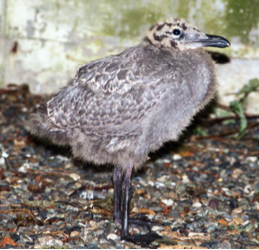 Fluffy and spotted down on the head, the body is covered with smooth grey feathers. 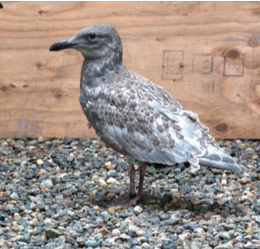 Caution: Gulls are an imprintable species!

Since it is possible for gulls to imprint and habituate on humans, avoiding interacting with the young gulls is necessary. Please do not feed, pick up, pet, or interact in any way with young gulls.

In care, highly trained staff and volunteers wear extensive “imprinting gear” to avoid them from associating humans with food or worse, not having a natural fear of “predators” such as humans.